Here are a couple of test drawings in colour. These came after I'd done the first storyboards (more on those in future fun posts, folks), and I was starting to get a feel for how the characters should interact. I was keen that the figures were the same height and would look comfortable together, even with Edgar's initial resistance to Jarvis. I'd been pretty sure from the outset that Jarvis should be a livid pink. Or that maybe his colour could change from scene to scene (more on that later, too). Anyway the pink wasn't to be. Edgar here looks disturbingly like British TV entity Jimmy Carr, so I had to sort that out. 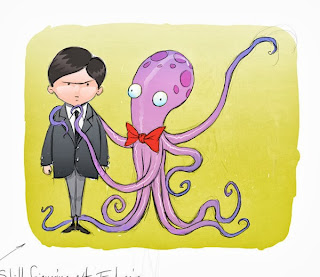 After some swift Edgar tweaks, I inserted this new version into Jarvis's embrace. His proportions are much better now, and I introduced the smart blazer to help convey his stiff and uptight personality, while hoping that having his weird little knees poking out of those shorts would keep him funny and endearing. At this stage I was giving him spectacles. I soon lost those as they'd been a bit of an afterthought and were hiding his expressions - plus they were hard to draw repeatedly! Next time if I'm designing a bespectacled character, I'd make them much more of a feature in themselves and an expressive part of the face. Jarvis is now in his regulation livery. 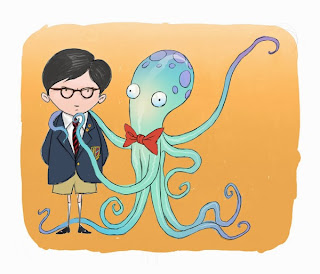 Blimey, is any of this interesting?? It'll hot up, honestly. There's some explosions and car chases in a bit.*

*(not really)
Posted by Martin McKenna at Thursday, September 26, 2013