So here's a decent butcher's at the two of them, Edgar and Jarvis in their final form. This is from the title page of the book. By the time I did this pic I'd drawn each of them a few dozen times, so I knew them pretty well and was enjoying myself. 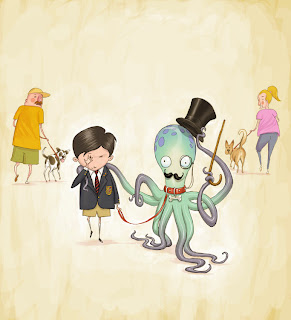 Edgar's deeply embarrassed by this strange organism on the lead, this slippery boggle-eyed thing he's still trying to convince himself and the world is his dog. Meanwhile Jarvis is behaving like some eccentric uncle, doffing his hat to the ladies.

Doing this pic reminded me of Going For A Walk With Grandad, one of the brilliant little stories by Leo Baxendale which appeared in his Willy the Kid Book 2, bought by my mum off a door-to-door salesman in 1977. I loved it. I'd have been about Willy's age, and I still have the book with me now, full of my grubby little fingerprints and bogies. From then, not recent ones. Anyway, Willy reluctantly goes for what turns out to be a really embarrassing walk with his Grandad, and in one illustration Grandad has his false teeth out and they're saying "Hello sailor!" of their own accord to Willy's headteacher Mr. Gass. So yeah, that came to mind.
Posted by Martin McKenna at Friday, September 27, 2013