I thought I'd show you an early rough version of the spread which follows Edgar in his quest to find the missing Jarvis. In early storyboards, and in these roughs, I've still got Edgar as a little Edwardian gent in a tweed suit.

The sequence was eventually rearranged, with the removal of the picture in which Edgar shows the photo of Jarvis to the dolphins, to allow the right-hand page to become a full-page pic of Edgar staring folornly out to sea. More on that Next Time. 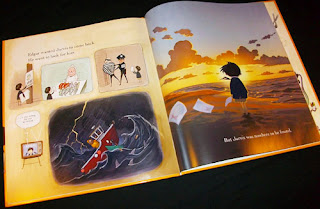